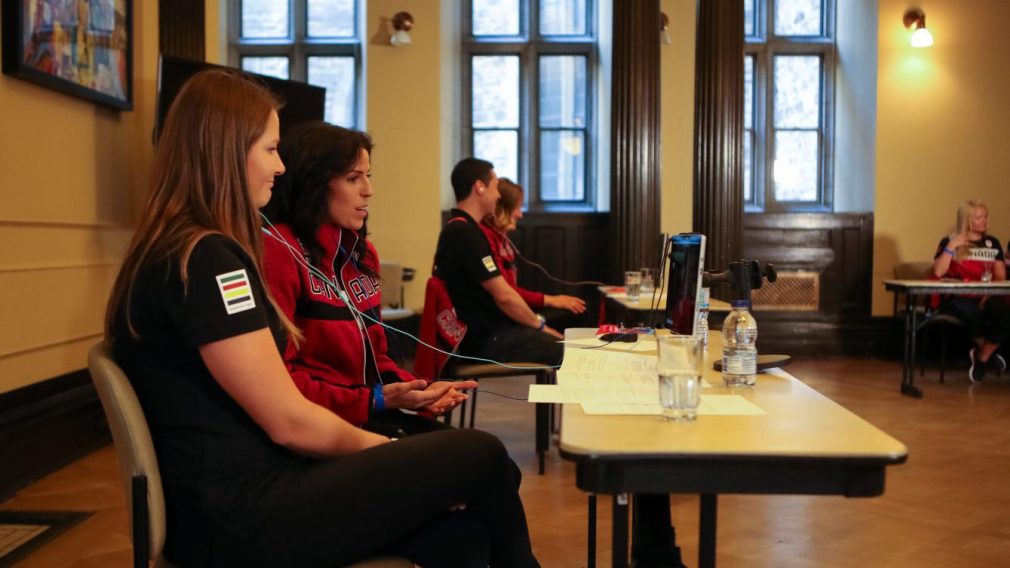 CALGARY (November 16, 2018) – On Saturday, November 17, The Canadian Olympic Committee (COC) will present the 2018 International Olympic Committee (IOC) Trophy for Olympism in Action to Classroom Champions.Since 1985, the IOC has provided National Olympic Committees with a trophy to award in their territory that highlights a specific theme based on current trends. The 2018 IOC Trophy for Olympism in Action recognizes those who use sport to build a better and more peaceful world. The COC is proud to recognize Classroom Champions as an Olympism in Action leader. By connecting underserved students with world-class athlete mentors, Classroom Champions uses sport to help students learn the skills they need to succeed in and out of the classroom. The program partners athletes with teachers and classrooms across Canada and the United States through an online platform, allowing athlete mentors to engage and inspire up to 300 students at a time from anywhere in the world they may be training or competing.At PyeongChang 2018, the COC announced that it was partnering with Classroom Champions to bring together Canadian students to chat with Olympians. Through four successful moderated live chats to date, athletes have focused on goal-setting, achieving success and overcoming failures through their experiences at the Olympic Games.

“One of the great strengths of the Olympic Movement is its ability to harness the power of sport beyond competition. Classroom Champions demonstrates the remarkable potential athletes have to inspire students to be great in every endeavour and is a powerful tool for athletes to engage students worldwide. The COC is very proud to award the IOC Trophy for Olympism in Action to Classroom Champions”– Tricia Smith, President, Canadian Olympic Committee“On behalf of the hundreds of athletes, thousands of teachers, and tens of thousands of students who take part in Classroom Champions, I’m both excited and humbled to accept this award from the Canadian Olympic Committee. Olympic and Paralympic athletes are positively impacting students, schools and communities across Canada by sharing their life experiences through our programs. This award recognizes the hard work they put in mentoring kids while training for their next Games. We will continue to build on the momentum of this award as we focus on growing our programs to ensure every single student across Canada who needs an athlete mentor has access to one.”– Steve Mesler, President and CEO, Classroom Champions