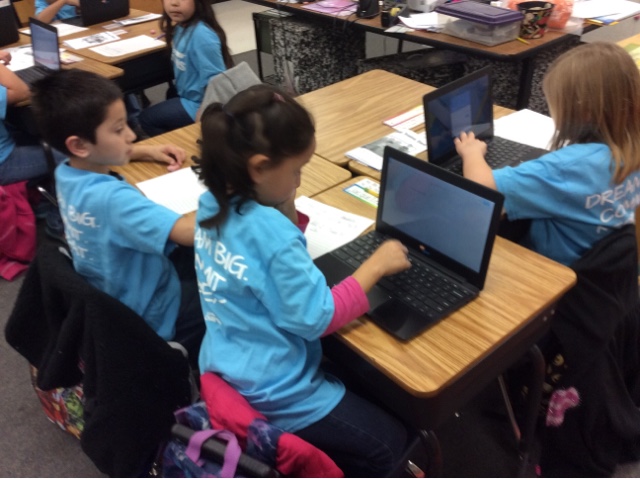 Melinda Yorke, grade 1, Von Renner Elementary School, Newman, CA, Nate Hinze, 2016-2017This month my students worked a variety of components of healthy living: safety, lifestyle, healthy eating, and not making unhealthy choices (drinking alcohol).We started out by watching Nate’s video on Healthy Living at the beginning of the month. He touched upon eating healthy, getting enough sleep, and exercise, but really focused on safety items that each first grader could do to. He explained by making safe choices, they could avoid being hurt and therefore stay healthy. He spoke of ways my first graders could easily make safe choices such as always buckling their seat belt, wearing a helmet when they ride their bike, and tying their shoelace so they don't trip on them (I was really happy to hear him telling them this this as learning to tie their shoes is continuing project with many of my first grade students). After his video we brainstormed different ways to be safe and the students made a google slide identifying one way to be safe and imported a picture and colored their background. Next we learned about healthy eating, the food groups, and the food pyramid. The students independently made a slide talking about the food groups, importance of eating a variety of fruits and vegetables, and limiting unhealthy foods, and imported a background image onto their slide. We then learned about the importance of exercise and not only does it makes you fit and stronger, but well oxygenated blood getting to your brain helps you to think and learn better. The students again independently made a slide with what they learned about how exercise helps you be healthy, and selected and imported a background for their slide to go with what they wrote about.

We then studied the FAAR lessons on alcohol and their effects on a young person's brain. This was an area that did require quite a bit of scaffolding and modification for the first graders. I began by talking about how our whole body is connected by thin threads called nerves. When they bend their finger, their brain is sending the message along the nerves to the muscles in their finger, telling the finger to bend. Their brain also has neurotransmitters (like nerves)​ that pass information between the different parts of the brain. When they eat healthy and exercise the neurotransmitters work well, but if a young person drinks alcohol, the neurotransmitters slow down and don't pass messages to their body or brain as well. We then watched the FAAR videos and had lessons on alcohol's affects on the cerebellum, hippocampus, and cerebral cortex. At the end of each video and lesson I had the students write on their whiteboard how they thought that specific area of the brain we had learned about would be affected by alcohol. For cerebellum they summarized alcohol's affect could cause them to fall; the hippocampus would be affected by them not remembering of forgetting things; and the alcohol could affect the cerebral cortex resulting in changing their feelings and making them being sad or angry. We did an interactive writing lesson to plan out the information about how alcohol can affect the parts of their brain (in first grade language), and why young people should not drink. Each student keyed in their slide and then selected a 'no drinking alcohol' background to insert.They healthy lessons this month helped my students learn about healthy eating, lifestyles, and safety, as well as why they should not drink. The children were very clear, even when we began that "alcohol is bad for kids", "only grownups are allowed to drink alcohol because it can make kids sick". They lesson helped them to develop some understanding that their brain has different parts and how alcohol can affect them. It also helped them to develop an understanding about neurotransmitters and how they pass information to different parts of the brain, and how alcohol can make them slow down. Overall healthy living not only helped my kids to focus on ways to eats, exercise, be safe, and avoid alcohol, it helped them to develop an understanding of how their whole body works together and how healthy choices not only make them stronger, it makes them have more energy, better able to focus and learn, and feel betterBelow is a link to a slideshow that has all of my students slideshows on healthy living and how alcohol affects a young person's brain.