How Bills players and Legends are supporting COVID-19 relief efforts 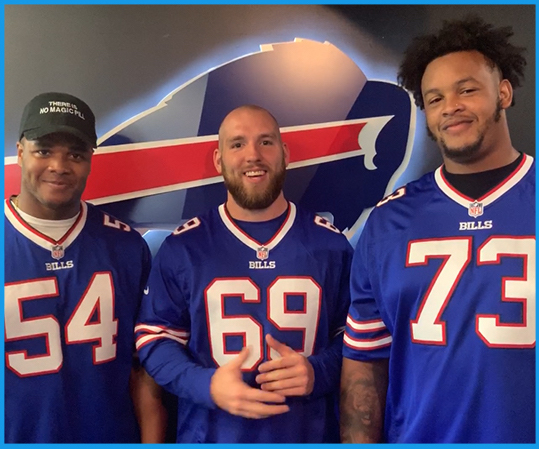 Like communities around the country, the City of Good Neighbors has come together to support one another during these trying and unprecedented times. As announced on Wednesday, March 25, Pegula Sports & Entertainment, in partnership with the Buffalo Bills and Buffalo Sabres foundations, will provide at least $1.2 million in direct community aid to Western New York residents in need during the COVID-19 pandemic.*

Determined to do their part, several Bills players and Legends have also taken action to make a difference:

Like many of his teammates, long snapper Reid Ferguson is eager to help during this difficult time. As announced on Friday, April 10, Ferguson teamed up with La Nova Pizzeria to deliver meals, including 140 sheet pizzas, to the dedicated staff at John R. Oishei Children's Hospital. Contributing $5,000 toward the total cost, the special teamer helped ensure that all the workers would be able to enjoy the delicious treat.

"This is just a way to show our appreciation," said Ferguson to Sal Capaccio. "We're truly grateful for everybody over there that's working really on the frontlines against coronavirus right now and trying to keep everybody healthy."

The heartfelt gesture not only offered Ferguson a chance to express his gratitude, it was another opportunity to highlight the deep connection he's made with the hospital over the years.

"I've been doing visits over there with the children, really since I got up to Buffalo," he said. "We do routine children's visits – just go and try and brighten some spirits every now and then with some of the kids that are there in the hospital. So, I've been doing it for about four years now since I've been a part of the Bills organization and just felt like it was the right move."

Ferguson's kindness continued Friday when he joined young students for a virtual learning session on Google! A mentor in the Classroom Champions program, which pairs students with athletes, Ferguson stopped by to say hello and check in on the kids.