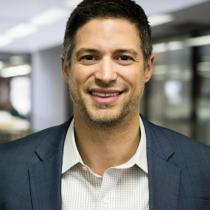 Steve Mesler is the co-founder, President, and CEO of Classroom Champions. He oversees the international operations of the organization, while also guiding its long-term strategic direction.

A three-time American Olympian™, Steve led his team to gold at the 2010 Vancouver Winter Olympic™ Games in 4-man bobsled. This was the U.S.’s first gold medal in the event in 62 years. He is a member of the Board of Directors of the United States Olympic™ Committee (USOC) where he also serves on the Compensation Committee.

Under Steve’s vision and leadership, Classroom Champions has grown from Steve being the only athlete involved in the pilot and working with 200 students in 2009, to today having more than 100 World-Class athletes, Olympians™, Paralympians™, College Student-Athletes and NFL Players mentoring more than 25,000 students across the globe.

Steve is an internationally recognized leader in the world of sport and education programming and philanthropy. He is a sought-after presenter at education and other conferences around the world, including Dubai, Sochi, Tel Aviv, Guatemala, and across the U.S. and Canada. He has also collaborated with the likes of TED, Big Think, and others to increase awareness of the importance of social and emotional learning (SEL) in young students.

As a finalist for the International Champion for Peace award, Steve was named one of Sports Illustrated “Athletes Who Care” alongside the likes of Grant Hill and Larry Fitzgerald. He is also a member of the National Jewish Sports Hall of Fame, the Buffalo Sports Hall of Fame, and the University of Florida’s College of Health and Human Performance Alumni Hall of Fame, where he earned his bachelor’s degree with honors. Steve was also named one of Calgary’s Top 40 Under 40 as well as one of United Way’s “Do-Gooders”.