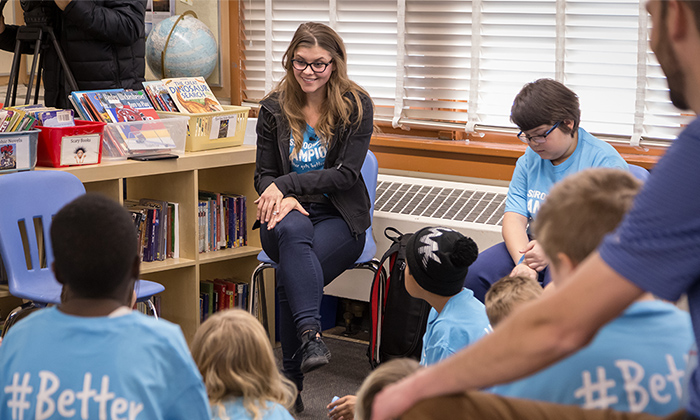 By: Elizabeth CameronIt was no ordinary Thursday for students at Colonel Walker Elementary School, who got to meet a very special person for the first time – in person.Olympic long-track speed skater and 2015 Speed Skating World Cup bronze medallist Marsha Hudey made a surprise visit to the Grade 5 and Grade 6 classes she’ll be mentoring this year through the Classroom Champions program.The volunteer-based initiative connects professional athlete mentors to more than 1,000 classrooms across seven Canadian provinces and the U.S. through monthly video lessons and live video chats.Hudey, who has been volunteering as an athlete mentor for two years, was in the middle of her regular video chat with the students when she stunned them by casually walking through their classroom door.“That was awesome,” she told Metro after spending some time talking with the students. “It’s the first time I've actually been able to go into a classroom and meet them face to face like that – it’s pretty special.”Hudey, who is originally from Saskatchewan but now calls Calgary home, happened to be in town for the upcoming International Skating Union World Cup – her mentees and their families were already planning to watch her in action at the Olympic Oval on Dec. 1.On Thursday, the students got the chance to hang out with Hudey and ask her anything: what she does to warm up before training, whether she’s team Apple or Android, and if she gets nervous before a race.(The answer was yes, but being nervous isn’t necessarily a bad thing, Hudey told them).When asked who inspires her, Hudey spoke about her dad and former coach, who introduced her to speed skating through his own love of the sport.“He coached me through my first Olympics,” Hudey told the students. “That was pretty special.”Teacher Geoff Kearney said the students have been enthusiastically keeping up with Hudey as she travels the world for her sport, so meeting in-person was a special moment.“I make sure that I’m always showing the kids where she is in the world, and we watch her races when they happen – so they’re always up to date on what she’s doing,” Kearney said.“It’s important, the students being able to meet someone who’s a champion at their sport and someone who can teach them how to be a champion in school and in life.”And as for 2026?“We’ll see if Calgary makes that bid,” Hudey told the class.