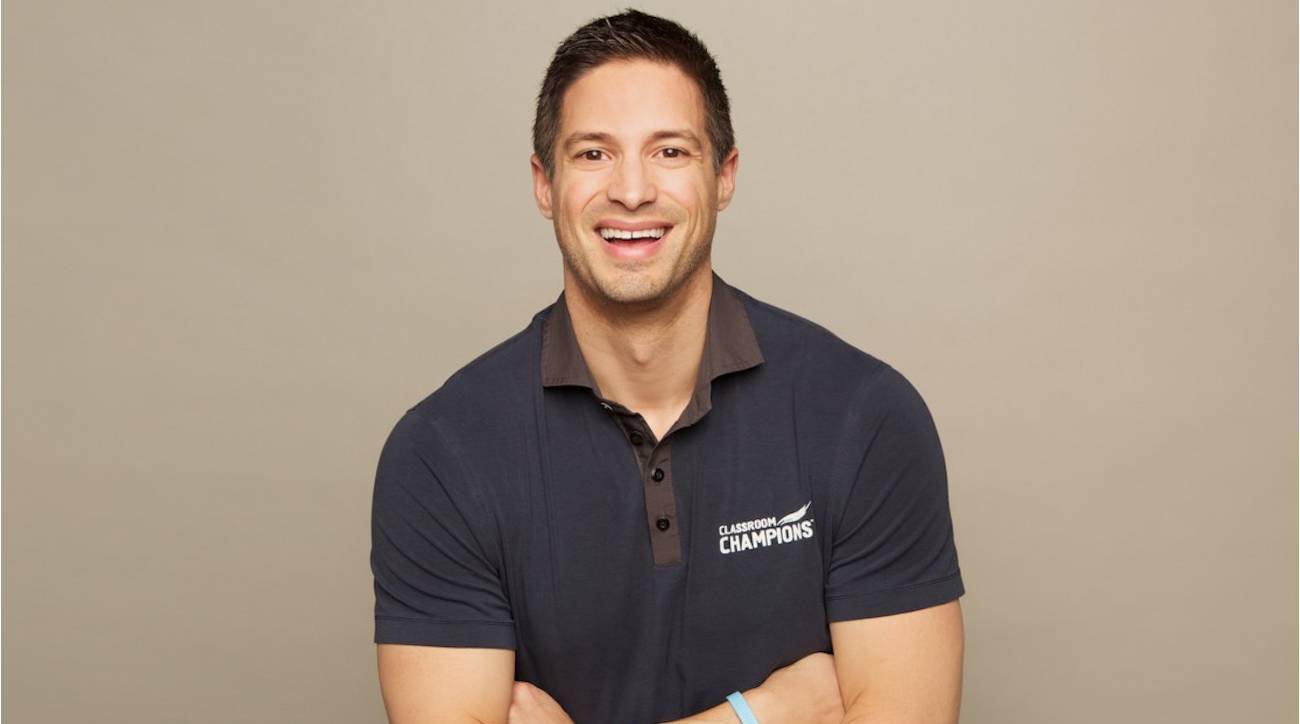 Nihal Kolur, Sports Illustrated, November 20, 2017 - Read Original ArticleIn a family of teachers, Steve Mesler felt ashamed. Living in Calgary at the time, the then-30-year-old Olympic gold medal bobsledder was tired. For the past year, he had been aimlessly bouncing around from school to school, speaking to children and attempting to inspire them with his story. But most days he would leave without a sense of accomplishment, without a feeling of impact."My sister is a teacher and my parents were teachers," he said. "But I called my sister one day and said I don't want to do these school visits anymore. Does that make me a bad person?"Upset at the lack of meaningful relationships he made at the schools, Mesler sought something more concrete. He lamented that most kids did not know who he was and consequently did not take away lessons from his speech. "I wanted to find a way for me to connect to kids in a sustainable way, rather than just doing this one visit and leaving and walking away," he said.This thought process inspired the creation of Classroom Champions, a program matching Olympic athletes with underprivileged classrooms. A tech geek since college, Mesler used Final Cut on his computer to shoot videos from wherever he was and adopted classrooms to teach. Mesler virtually brought kids with him to the Olympic experience, from the Olympics themselves to the training that preceded them. He showed them not just the end result of his success but the whole process."I wanted the kids to follow the experience with me. If I was hurt, I wanted to tell them about that and let them see it," Mesler said.

The program's pilot year produced immediate success. Leading up to the 2010 Winter Olympics, Mesler exchanged videos and letters with nine classrooms across the United States, ranging from kindergarten to the eighth grade. The next year, 28 classrooms interacted with Olympians Sue Bird and Natalie Burgener, among others, while they prepared for the 2012 Summer Games in London. After seeing positive results, he began to realize there was a bigger opportunity for his initiative."Early on, we were wondering if athletes would even want to do it. And now, we have a waitlist that's 30 athletes long," Mesler said. "Athletes, we're performance driven. So when we can show the measured impact, it's easy to grow."Within six years, Classroom Champions had begun mentoring 25,000 kids and had a waitlist of 30 Olympians, Paralympians and college student-athletes who expressed a strong desire to participate. This past year, the organization started a pilot with the Buffalo Bills to garner involvement from NFL players.According to Mesler, its philosophy is simple: Combine two methods of mentorship. On one end is the über personal big brother-little brother style program, which pairs a mentor with an individual child. On the opposite end of the spectrum is the internet, which allows for less interpersonal interaction, but is infinitely scalable. Mesler and his sister aimed to tackle the "space in the middle" where athletes can forge relationships and interact with students, but without the excessive time commitment and exclusivity of a focus primarily on individual relationships."These kids feel connected and it's scalable to some degree," he said. "Any of these guys can do it. All they need is a phone and we give them the bumpers. The athletes are truly the subject matter experts."A standout athlete since a young age, Mesler competed year-in and year-out for national championships in track and field events. By 18, he had won All-City, All-State and All-American honors and was headed to the University of Florida to compete. But in his senior year of high school, Mesler came up limping on a run and tore his hamstring.What followed was a grueling five-year stretch. First came the hamstring rupture. And then an ankle injury. And another. And another. When Mesler finally seemed like he was healthy and ready to compete, he tore his ulnar collateral ligament in his elbow. A fifth-year senior at the time, he was faced with a difficult choice."It was devastating," he recalls. "I remember thinking, 'I guess this is my time when I have to go get a job and go to grad school or do something.' I had no idea what I was going to do."With his life goals crumbling before him, Mesler fell into a state of despair. "I was going to Florida to run and compete in the Olympic Games," he said. "And I couldn't do it. I was so desperate because I didn't want to think that I peaked when I was 17 years old."As he frantically attempted to put the broken pieces from his athletic career together to build a future, Mesler recalled a conversation he had with a mentor of his at Florida. When the coach told Mesler about how he switched from track and field to bobsled, the 20-year-old cheekily grinned and let out a quiet laugh. He was an international level track athlete, not some guy pushing a sled.But as Mesler slouched into his sofa, with his arm in a sling, he couldn't escape the coach's voice in the back of his mind comparing him to a bobsledder. Unwilling to take a desk job and determined to pursue athletics, Mesler looked for the Olympic Committee's address on Yahoo!. Still with just one working arm, he wrote an e-mail expressing his desire to bobsled and telling the committee his height, weight and strength profile."If I can do this, great," he wrote. "But if not, just let me know and you won't hear from me again."He received a response instantly."I was so desperate, I asked to bobsled," he now laughs.As his school bus pulled up to New York City's famed Rockefeller Center, Brent Nycz and his co-teacher frantically attempted to corral all 24 of their students, who varied in age, ability and special needs. The 26-year-old New-Jersey native saw record attendance for the trip, even though it required a 6:30 a.m. start time. On an ordinary day, Rockefeller Center would be littered with children and parents, ambitiously skating in the winter breeze. But on this day, children were scarce. Rather, the small crowd was full of media, fans and Olympians–gold medal figure skaters Meryl Davis and Charlie White in particular.As the girls giggled and snapped what seemed to be hundreds of picture, the boys started chanting: "Go Charlie! Go Meryl!" The boys and girls followed Classroom Champions board member Lisa Monarski to the edge of the ice, where they grinned and cheered as they watched Davis and White perform a routine with elegance and grace as they have done thousands of times before.While Nycz and his students had never met Davis and White in person, the class had been video-chatting, tweeting and taking pictures with the figure skating champions through Classroom Champions. Through all the workouts, practices, ups and downs on the couple's road to the 2014 Winter Olympics, the athletes shared videos with Nycz's class and inspired them through Classroom Champions' extensive curriculum that focuses on goal setting, health living, perseverance and more.

"I always say Classroom Champions saved my career," Nycz said. "Going into the end of my fourth year of teaching, I was feeling that burnout that most teachers feel. I was ready to quit. But to be able to teach kids things that will carry them beyond the ABCs, that they will need to learn to become successful children, successful adults, is extremely valuable".

Mesler cites Nycz as an example of the program's impact."When you can create this relationship with these kids, they just look at disabilities and challenges differently for the rest of their life," Mesler said. "So outside of all of our aggregate data, when you see those cultural changes happen, its inspiring."The 2010 Olympic gold medalist is adamant he is not in the business for a "feel good story." Just like his switch from track to bobsled, he insists he is all-in on his new initiative. "We are measuring and doing things in a way that a clinical organization would do," he said. "We want to change the system."What's next for Classroom Champions? Mesler says he's not sure. But his goals remain widespread and ambitious. "We want to do things globally," said Mesler. "We want to tap into all the [National Olympic Committees] in the world and make this a meaningful operation."And while Mesler's athletic career did not follow the path he initially envisioned, he maintains his journey was infinitely necessary for his larger, nonathletic goals."There were a lot of guys I competed with that were better [than me]," he said. "But if I didn't have those lessons, those failures, those times I fell on my face, then there is no way I would have the discipline to be where I am.""In retrospect, would I have rather not spent five years injured? Yeah," Mesler said. "But I don't think I get to do what I did without it."