With Students Stuck At Home, Classroom Champions Brings Athletes Into Their Living Rooms 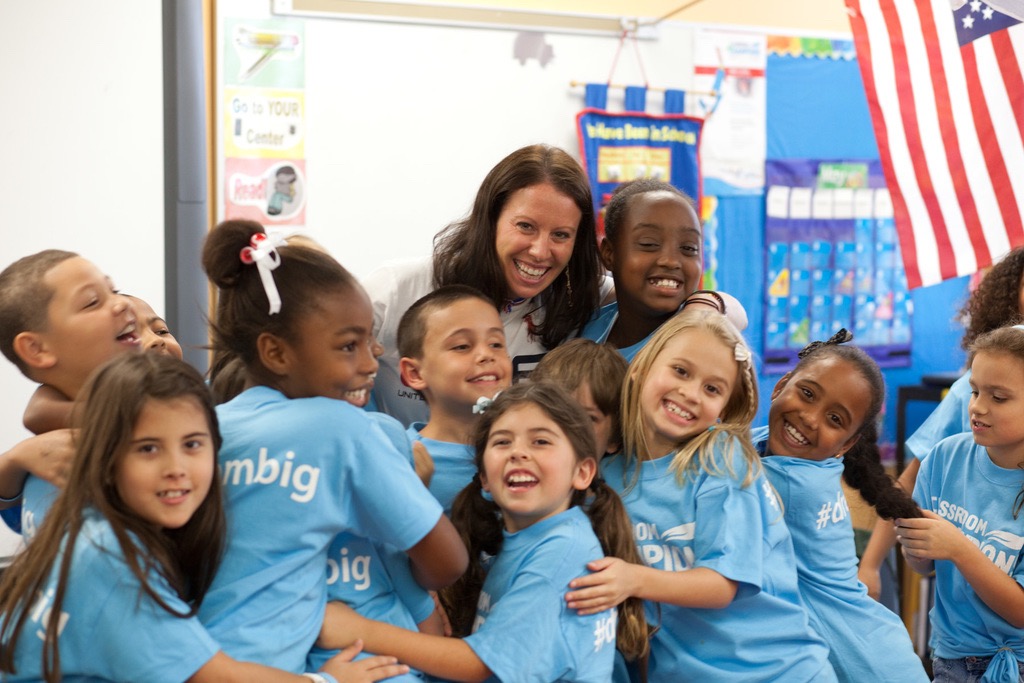 Samantha Bosco never imagined herself as the star of an internet cooking show.

A decorated Para-cyclist, she had planned to spend much of her time this spring preparing to compete in her second Paralympic Games later this summer in Tokyo. However, with the Games postponed until 2021 and people forced to stay home because of the coronavirus pandemic, Bosco broke out the kitchen utensils and fired up the webcam to host a Facebook Live session showing children how to make a healthy snack.

Bosco made what she called “apple teeth” — apple slices with peanut butter and miniature marshmallows. The two-time Paralympic bronze medalist admitted she was nervous about appearing live on the internet, but it was for a good cause.

“I definitely wanted to do something with the kids and for the kids,” she said.

Bosco has volunteered for the past two years as a mentor for Classroom Champions, a nonprofit organization cofounded by retired Olympic bobsledder Steve Mesler, who also serves on the board of directors for the United States Olympic & Paralympic Committee.

Like other highly decorated athletes who work with Classroom Champions, Bosco was happy to participate in a Facebook Live chat. She wanted to offer tips to students no longer able to attend school in-person.

These are unusual times because of the COVID-19 pandemic. Schools across the country are closed for safety reasons. As a result, Classroom Champions has had to get creative and find new ways to reach and inspire students who would typically interact with Olympians and Paralympians in their classrooms.

“I have so much pride and admiration being a part of Classroom Champions and how much they’ve stepped up while kids are staying home and parents are struggling to kind of have that homeschooling and have their kids not go stir crazy,” Bosco said. “I’m definitely very honored to be part of the team and a part of it all and a mentor for the students.”

Nearly 200 athletes, ranging from collegiate student-athletes to U.S. and Canadian Olympic and Paralympic champions, serve as mentors for Classroom Champions. They talk to kids across the country about setting goals, dealing with adversity and living healthy lives — all lessons they’ve learned during their athletic careers.

However, mentors have been unable to connect with their students since COVID-19 forced school closures and physical distancing. Classroom Champions has responded by providing all parents, kids and teachers with the curriculum the organization typically gives to select schools for free.

The curriculum, including video lessons and lesson plans, is available on the Classroom Champions membership website.

“For sure kids need guidance during this time. Parents are looking for activities for their kids to do, which will help with their home learning,” said Emily Cook, a three-time Olympic aerials skier who now serves as the athlete mentor manager for Classroom Champions. “It’s a big shift for everybody.”

Given the uncertainty of the moment, Classroom Champions has started a new digital feature called Mindful Minutes. Athletes speak to children about ways to handle stress and remain connected to their community when they’re no longer attending school and seeing their friends every day.

Classroom Champions also started its 20-minute Facebook Live chats with athletes to provide kids with a few laughs and some lessons.

Aerials skier Winter Vinecki recently showed students how to make a healthy breakfast burrito with eggs and vegetables. The next day, Canadian distance runner Geneviève Lalonde led kids watching her on the internet through a quick yoga session.

“Athletes want to help right now, and that’s what I’m seeing more and more,” Cook said. “So many of our athletes (are) reaching out and just asking, ‘What can I do? How can I connect with my kids while they’re home?’ While we’re going through these uncertain times where there must be so much more stress on the kids and parents. I’m loving that I’m seeing so many athletes reach out to us.”

Years ago, Cook said she reached out to her own mentors and looked for ways to stay connected after she suffered the worst crash of her career. She was forced to withdraw from the Olympic Winter Games Salt Lake City 2002 after she broke both of her feet during a practice jump only two weeks before the Games.

While recovering, Cook coached kids, made regular visits to schools and learned to cook. She also asked friends what helped them get through tough times — something Olympic and Paralympic athletes have been forced to ask themselves during the COVID-19 pandemic.

Some athletes are sharing what works best for them with kids and parents through Classroom Champions.

“I think the biggest thing that everyone is learning right now is that community exists, whether you’re in the same room as someone or not,” Cook said. “Being able to create this community for our athletes and our students is so important to us on a day-to-day basis, especially right now when so many of our students are in isolation, at home, either in self-quarantine or shelter-in-place orders.

Alex Abrams has written about Olympic and Paralympic sports for more than 15 years, including as a reporter for major newspapers in Florida, Arkansas and Oklahoma. He is a freelance contributor to TeamUSA.org on behalf of Red Line Editorial, Inc.